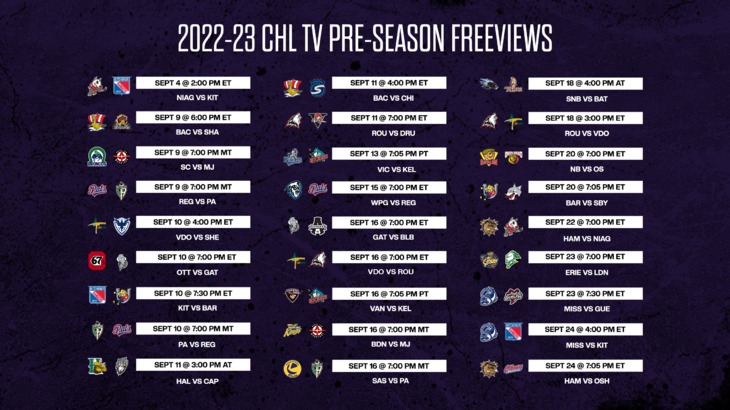 With the 2022-23 season around the corner, the Canadian Hockey League today announced that more than 25 pre-season games will be available as ‘freeviews’ via CHL TV, including eight matchups from the 2022-23 Western Hockey League exhibition schedule.

The schedule includes three showings of the Regina Pats headlined by 2023 NHL Draft favourite Connor Bedard, a 2021-22 WHL Eastern Conference First Team All-Star whose two seasons in the junior circuit have witnessed him record 63 goals and 65 assists in only 77 outings.

The Pats begin the upcoming exhibition slate in a home-and-home series against the rival Prince Albert Raiders, with the two contests set for September 9 and 10. Fans can also tune in on September 15 as Bedard and the Pats host the Winnipeg ICE, last year’s recipient of the Scotty Munro Memorial Trophy after the club finished with the WHL’s top regular-season record counting a franchise-best 111 points.

Available to fans from coast to coast, CHL TV is accessible on the CHL mobile app, in addition to Apple TV, Roku, and Amazon Fire, and online at watch.chl.ca. Each year, CHL TV offers access to more than 2,000 regular-season games covering the CHL’s 3 Member Leagues and 60 markets across Canada and the United States. Fans can download the free CHL app via the App Store and Google Play.

Any additions to the pre-season freeview schedule will be announced at a later date. The 2022-23 WHL Regular Season begins Friday, September 23.