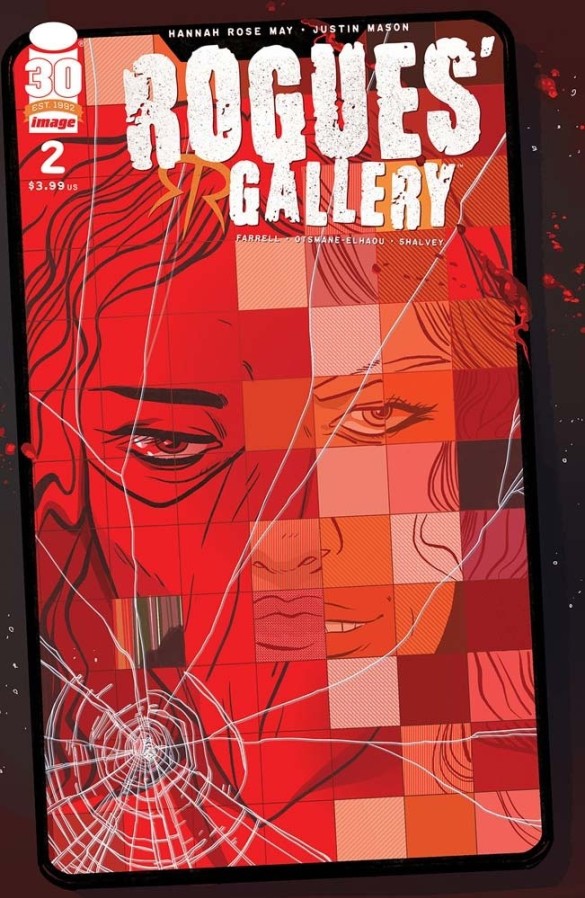 Written by Hannah Rose May and Declan Shelvey

The first two issues of Rogues’ Gallery raise powerful, at times painful questions about fan culture. Rogues’ Gallery #2, in particular, is one of the strongest individual issues of the year. Scenes of public opinion vacillating wildly between extremes evoke genuine anxiety, thanks in part to Justin Mason’s social media-laden layouts. Maisie Wade’s profession –an actress on a popular TV series adapted from a comic– inevitably bleeds into her personal life. The former suffocates the latter until there’s no distinction. Readers are left with a sense of emptiness orders of magnitude less than the loneliness Maisie, and her real-world counterparts, contend with on a daily basis. Ideally, the opening issues inspire empathy and self-reflection on the part of readers.

Indeed, that’s the other side of the coin Rogues’ Gallery pits against the protagonist: the audience. Viewers, readers, fans. Supporters, allegedly. Us. Series creator Hannah Rose May effortlessly highlights an unavoidable fact of modern fan culture: more than anything, fans love to hate things they love. Hate-watching a show, spending hours on message boards discussing all the ways a movie or comic sucks, and of course, a self-righteous, entitled disdain for performers and creators. Maisie becomes solely an object of derision for the antagonists, who are incapable of viewing her for what she is, and what they barely qualify as: human.

The lack of humanity pervading fan culture is arguably the main theme of Rogues’ Gallery. After two issues of setup, May uses issue #3 to explore the concept in a more visceral way–one involving guns, butcher’s knives, and Daredevil-esque batons.

That said, May repeatedly pulls major emotional beats out of seemingly small moments. A surprisingly heartbreaking sequence in Rogues’ Gallery #3 involves Maisie and her husband going out for dinner while she processes the fallout of recent career decisions. The couple are apprehensive about spending time in the public eye, but decide on a quiet Italian place where they know the owner. The owner, unfortunately, is a self-interested ass who leaks Maisie’s whereabouts to the press, forcing an early exit.

It’s a simple scene completely grounded in reality, but allows May to indulge her characters in the despondent tone carried over from the previous issue. Seeing Maisie and her husband unable to enjoy a meal is utterly defeating, and the evening is only going to get worse.

And this is where Rogues’ Gallery, already 75 percent complete, runs into potential problems. The issue teases upcoming horror, action, and a “big reveal.” But is any of that necessary at this point? There will no doubt be a reckoning between the objectors and objectified, but that conversation should serve as the fulcrum around which the finale revolves, rather than a two-page aside after the Panic Room smoke clears. Rogues’ Gallery has asked big questions about fan culture, and while it would be unfair to expect Hannah Rose May to succinctly answer them, I hope she tries. I hope she sees the forest beyond the trees–or rather, the climactic extended dialogue beyond the cosplay fight scenes.

Not that the Rogues’ Gallery creative team can’t handle both. Mason’s art adeptly compliments the back-and-forth between the world of comics and reality. The opening page depicts a group of fans dressed as villains scaling the Hollywood hillside–a shaggy green expanse under a violent red night sky. The style is both slick and unkempt, reminiscent of ’90s Image or a Teenage Mutant Ninja Turtles comic. The very next page depicts Maisie and her husband settling into dinner at an Italian restaurant, a scene grounded by slice-of-life details and thoughtful human expressions. More importantly, Mason’s layouts effectively move the compact story along without ever feeling rushed.

Triona Farrell’s colors are bold but not garish, again threading the needle between comic book spectacle and the muted tones of reality. That said, Mason and Farrell’s shadowwork is a bit sketchy, which may be problematic for a final issue taking place in a dark mansion. Shadows in Rogues’ Gallery #3 read as black fingerprints smudged randomly throughout scenes. At worst, some of the shadowy panels look unfinished. On the other hand, the series’ most violent panel yet is a memorable, beautiful mess of red gore suffused by the raggedy darkness.