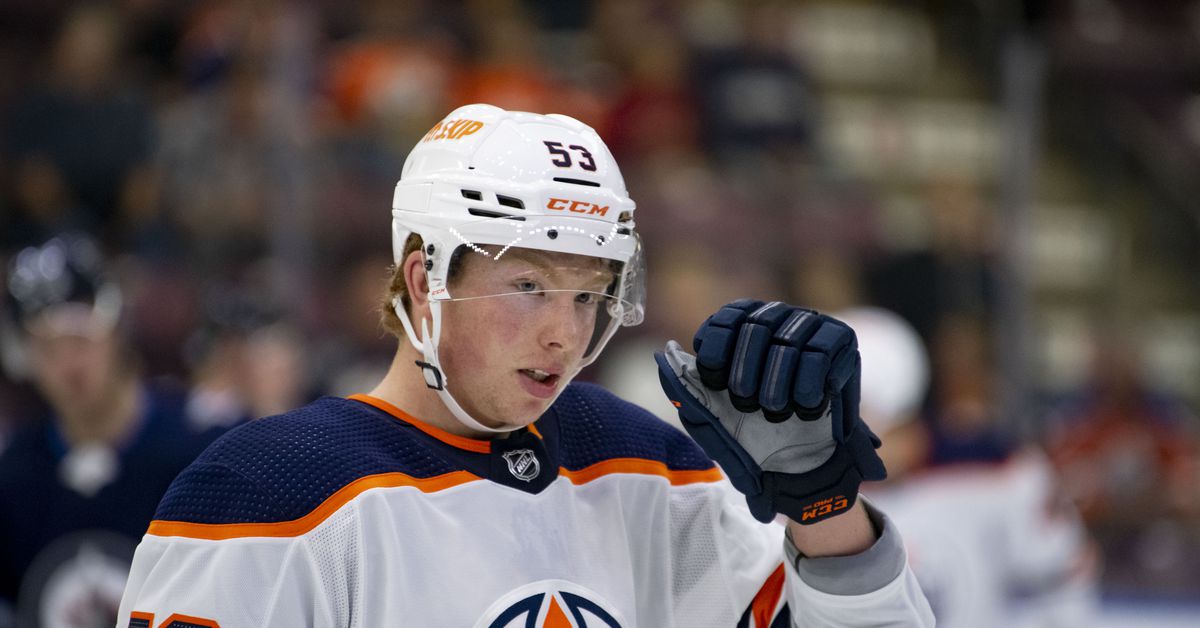 The Oiler prospects came for the clean sweep today against the Canuck prospects and it was mission accomplished. This was a far more competitive game for two periods than either of the other wins. Ryan Fanti kept this game close early on. Eventually. the Oilers seized control and won the game going away 5-2.

As opposed to my normal video review, I got a chance to be at the game live. Here are my notes on players who were notable. Not every player is mentioned, but that should not be viewed as a negative. Simply, his game didn’t stand out in any regard.

As reported by Tony Brar, the lines and pairings for the game were:

Hamblin was quieter today offensively, but for me, today’s game is what can get him NHL games. He was strong defensively and did an excellent job supporting his defensemen and helping them win pucks and exit. His skating is definitely an asset at this level and it appears to be sufficient for the NHL. Played big minutes on the PK especially in the second period. Performed very well.

To my eye, he was close with another young prospect for third best forward today. I gave him the nod because his linemates were Engaras and Kambeitz, who are more defensive in nature. Schaefer is still challenged with lateral mobility. However. today his hands were very noticeable in creating opportunities for himself and his teammates. He demonstrated his wicked wrist shot today scoring from the high slot. The exciting part of his shot is he appears to be able to release it from very tight windows with accuracy and power. Was notable in playing 2PP and some PK.

Had his best game of the tournament and was comparable to Reid Schaefer this game. He’s got a high motor and a great stick. He notably created three turnovers in the offensive zone creating excellent scoring chances on all three. For him, going back to junior will be an opportunity to really work on his puck possession skills and to refine his shooting release. His skating is notably improved, but more edge work would be a plus. Chiasson played a healthy dose of 2PK today and performed well.

Quieter game today. Thought the speed of the Canucks team caused him some issues. Nevertheless, he’s such a smart player that he was able to adapt and overcome.

He started the tourney slow, but today was a very good game for him. He’s a very smart player in his own zone and a puck hound on the forecheck. Did have an assist today. He will need to work on the explosiveness of his skating and he will need to score. Still he’s come along way for a 6th round pick. Please don’t fight anymore Filip.

Much quieter game today. 3 in 4 days against quicker and stronger players may have had an impact. This is certainly some of the most physical hockey he’s played. Still managed to score a 125 foot empty netter and was very clean in his own zone.

Saw some jam today from Petrov and he was rewarded with creating turnovers for his teammates. Video of this is what he should watch on loop. It’s clear he has the necessary skills to score. Now he needs to work on playing inside and on the wall with confidence. Watching his skating this weekend gave me great confidence that it will not be an issue.

Perhaps feeling confident, Wanner was a little looser with the puck today. He made a couple of risky exits that the coach will probably hilight. However, for the most part he easily exited the zone again pressure both skating the puck and passing it. Got beat physically down low more today which was a surprise given his size. Three in four days is the likely cause. This is a prospect to watch. I wonder if he starts fast whether he gets an invite to the U20 National camp.

Played a steady game today. A couple of more questionable decisions, but much more confident in retrievals and exits. His body language was such that it was clear he wasn’t happy with his performance. Not the ideal tourney for him, but he will get a chance to improve at main camp.

Noticeable over the other defenders not mentioned, but didn’t have his best performance. Was physical in his zone and generally defended well. Thought he was a little slower to recognize options when exiting today, but didn’t cost him anything. Had a quiet game offensively. Played a heavy does of 2PK and sometimes 1PK.

The Oilers end the prospect camp at 3-0. On to big boy time in Edmonton.