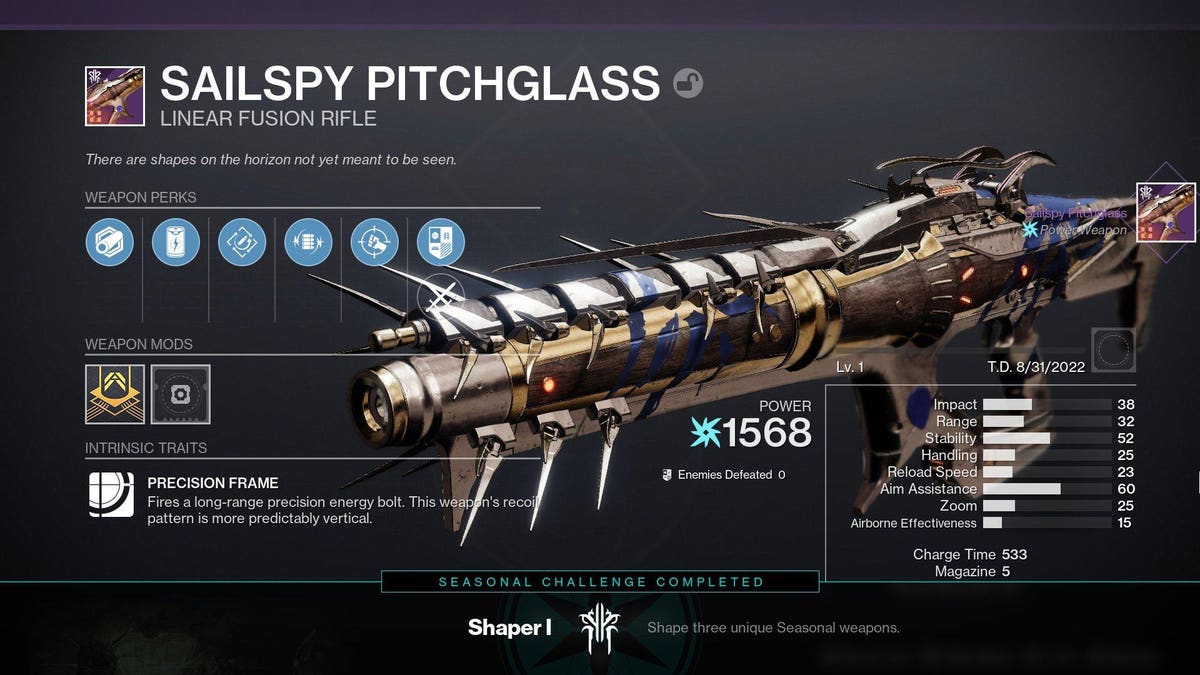 It’s that time again, the hunt for red frame patterns in Destiny 2. We have a few on world drops, all the new King’s Fall raid weapons, and the more accessible Plunder selection of weapons, which is what I’m going to talk about today.

Bungie has not exactly absorbed the feedback about crafting patterns feeling like too much of a grind. They still require 5 each, and this season there is no upgrade that lets you pick a dedicated red frame pattern once a week.

However, there are a lot more sources of weapons in Plunder, more so than Haunted, where you’d only see weapons from Containment runs, maybe, and the occasional Sever reward. Here, there are a lot more places to get them. I finished my first full five-drop pattern yesterday, the Sailspy linear fusion, and I had people asking how I did it so quickly, so I’m going to explain. Yes, part of it is obviously “playing a lot” but there are things you can do to make it go faster. I have 15 total deepsight drops in just over a week, and one completed pattern.

Those are the only two I have unlocked right now with timegating, but I would also look for:

Rank Grinding – You will also move through the ranks of the HELM itself pretty fast, and every sub-rank will get you a drop from the vendor, which can be red frame.

Milestone Rewards – You will get Plunder loot from two tiers of Expedition farming, three Ketcrashes, 8 Plunder HELM bounties and a Master Ketchcrash, more chances for red frames. I can’t prove these are more likely to be patterns, but I think they might be.

Free Focusing – Here’s the real secret, and what I’ve done in previous seasons as well. Once you have gotten at least one copy of all six weapons, you can start random focusing weapons for six Umbral energy, half what it costs to direct focus. You can get all six by doing the treasure map upgrade and doing six Expeditions, as it will cycle you through all of them. So then you just free focus until you’re down to maybe 1 or 2 weapons you’re missing, then start target focusing. But this will get easier as you reach later tiers where there are more upgrades for Umbral Energy, because it’s tight right now. Do not direct focus now or focus for armor.

And there you have it. You will also just have to run a lot of stuff to get all the materials you need for maps and focusing and such, but this is how I’ve gotten where I am so far, and I’m hardly only grinding the seasonal content right now. Best of luck with those pattern drops, oh and yes, you can just dismantle red frames for the pattern now, rather than needing to grind out each one. I know it’s scary but trust me, it works.

Pick up my sci-fi novels the Herokiller series and The Earthborn Trilogy.