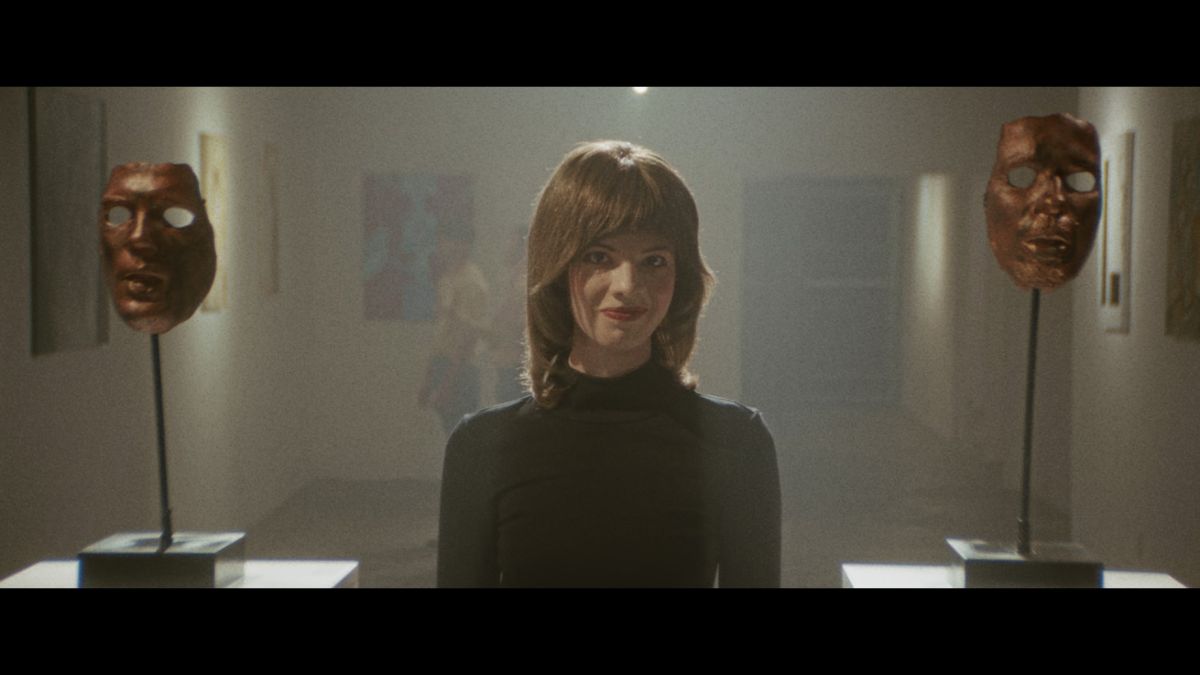 When playing Immortality, you’ll want to take a lot of notes.

It’s typical for people reviewing things, whether it’s movies or games, to take notes. When I’m playing a video game for review, I either have my notebook next to me or a blank notepad doc where I jot down my thoughts, figure out puzzle solutions, or start planning out my outline. Normally, I’ll have four pages or so of notes. For Immortality, the new game from Half Mermaid Productions and founder Sam Barlow, I had 12, not including all the in-game tools I used to track the moments I wanted to remember. I wanted to pick apart every single piece of this game, write down every seemingly crucial quote, and create my own timeline of events.

Immortality is a stunningly complex and dense game that encourages intense engagement. There are multiple layers to peel back in figuring out what happened to actress Marissa Marcel, who made three movies that were never released and then vanished, and you’ll want to pay attention.

As you watch footage compiled together from those three movies, along with glimpses into rehearsals and her life outside of acting, you’ll start to piece together an almost mythical tale about the Hollywood machine, the lengths people will go to for their art, and how fleeting it can all be. It’s a story that’s been told before, but never in such an ambitious and delicate way.

Disclaimer: This review was made possible by a review code provided by Half Mermaid Productions. The company did not see the contents of the review before publishing.

How to play Immortality

If you’ve never played a Barlow game before, the chopped-up narrative structure might not click right away.  You start off with one clip of the story, and through context and other clues, you find more footage you can use to piece together what happened. It’s a concept he’s used in past games like Her Story and Telling Lies, and it allows the player to develop their own interpretations of events and explore them in their own way.

A huge part of playing these games is not necessarily about experiencing a story but rather building one, which contributes to a unique sense of interactivity. Previous games had you discover clips by searching through databases using keywords. Immortality changes things up by creating a system inspired by a Moviola, which was one of the first machines used for film editing back in the early 20th century that allowed the user to see the film as they edited. It creates a more intimate setting than something like the FBI database in Telling Lies.

Instead of using text, you connect clips by clicking on objects and people in the clips themselves. It’s an improvement because it’s faster than typing in keywords, but it also helps the player build connections much more quickly. It’s also more impactful to click on a gun in one scene, see it reappear elsewhere, and figure out what it means both literally and figuratively than typing in “handgun” and seeing where you end up. It feels more seamless and natural, even if you’ll jump forward years in time or to a movie or scene that initially feels out of place.

With Immortality, you’ll start with one clip — a seemingly inane talk show segment with Marissa where she talks about her upcoming movie. The tutorial shows you the match-cutting mechanic, and then you’re off to the races. You’re placed in the editor’s chair, just like you were placed in the role of investigator in Barlow’s previous titles, and are presented with a grid of every piece of footage you’ve discovered. You can favorite clips or sort them via different elements (date, symbol, etc.), but you’re given no other guidance, which makes sense. Over time, the game and the story will come together on their own.

Let’s go to the movies

As you jump from clip to clip, from movie footage to video diary to rehearsal, Marissa Marcel’s world expands. You meet John Durick, a director of photography turned actual director that becomes a constant in Marissa’s life; Carl Greenwood, an actor who’s a bit out of his depth; and Amy Archer, an actress who always seems like her mind is elsewhere. You meet extras, body doubles, talk show hosts, and a mysterious blonde couple, and watch not only Marissa’s life line up but also the three movies in her filmography take shape.

It helps that the cast is packed with incredible actors, although Manon Gage, who plays Marissa, is as powerful and mysterious as the character she plays. The game also treats these movies like they’re real, so much so that you can find them all on IMDb.

These movies not only traverse three distinct eras in cinema — with ever-changing aspect ratios — but also work as plot devices themselves. The game is drowning in symbolism and purposeful choices, and as you return to previously discovered clips (and you’ll want to), it all comes together in such a complete way. It almost feels unfair when the realization hits as to why exactly these three films were chosen because it feels so obvious. Of course, Barlow, who has explored the concept of double identities in his work before, would make a movie about body doubles! Why didn’t I notice before how the game draws parallels with Ambrosio?

Even without the deep analysis, the player gets a lot out of just watching these movies come together in ways that feel accurate and natural. The actors discuss blocking, break down character interpretations in between scenes, and pick up in the middle of line reads to go again. These films feel fully realized by the time the credits roll because you see so much concerning their making, but the Immortality team also clearly took care to depict production as accurately as possible. It helps that screenwriters like Amelia Gray (Mr. Robot), Allan Scott (The Queen’s Gambit), and Barry Gifford (Lost Highway) contributed to the script and add a lot of authenticity to the proceedings.

This game is as much about the love of film as it is a criticism of the Hollywood complex. You want Marissa, John, and the others to succeed, but as you can guess from the synopsis, that’s not going to happen.

Is Immortality a horror game?

The press materials describe Immortality as a horror game, Barlow’s first since Silent Hill: Shattered Memories, and at first, you don’t quite understand that label. Sure, the game’s pitch feels ominous — what really happened to Marissa Marcel, and why does the marketing not reveal much at all? — but there isn’t a lot for the first hour or so that pivots the game into horror territory.

The game doesn’t have jump scares or copious amounts of gore, but it’s packed with creeping dread, a sense that just out of frame, something is going to tickle the part of your brain that detects normalcy and fill you with discomfort. It feels like each clip has some aspect that feels just slightly off. Marissa might look towards the camera in a way that feels like she’s looking through it, or another character might give her a strange glance when she isn’t paying attention. These are things you might not pick up on at first subconsciously, but the game has already primed you to be on the lookout for clues. A clip might seem inconsequential if it just shows actors reading through a script, but you might notice one of these minute elements and wonder what’s to come. You might not notice them at all.

However, as you discover more and more footage and events start to fall into place, Immortality becomes something more sinister. The layers peel away, and you start to see the true game come to light in a way that is somehow both jarring and gradual. Marissa continues to be the epicenter, but it also becomes about the player and philosophy. At one point, you realize you’ve been kept in the dark, and what you do with that revelation will inform what becomes an almost entirely different game after the first couple of hours. Go back to clips you’ve already watched and you’ll realize they’re packed with foreshadowing and symbolism. It’s the ultimate story within a story, but you had no idea it was coming.

In a way, Immortality is a subversion of Barlow’s previous titles. If you’ve played Her Story or Telling Lies, you might jump immediately into Immortality’s familiarity, knowing all you need to do is find the right clip to keep moving forward in what is a straightforward story. But the game wants to catch you off guard. It wants you to start putting the story together so that it can introduce new and surprising mechanics and help you rethink linearity and reality. The setup becomes more artificial, and you start to question if what you saw was a trick of the camera or just something you missed from a previous clip. Barlow’s games have always involved the player in some capacity, casting them as an investigator with an actual reflection on the screen, for example, but Immortality takes that to the next level.

Of course, how much you’re involved is limited. What can you do in the face of something you can’t control and what you don’t understand?

Should you play Immortality?

Immortality is something special, a game dripping with atmosphere and oozing ambition. You rarely see video games like this, featuring not one but three stories that feel fully realized. It feels like you’re watching three separate films tied together by a real enigmatic actress and the people she pulled in with her.

Beyond the game’s physically wide scope, it also manages to conquer both the tragic and the dreadful, the real and the meta-real. It tackles so much during its runtime (I rolled credits in six hours, but your mileage may vary), and it’s shocking to find out where the game goes. Whatever you think Immortality might be — literal immortality, immortality in art and fame, the game itself — it’s so much more. It’s more than so many of the best Xbox or PC games now available and might be one of the best games of the year.