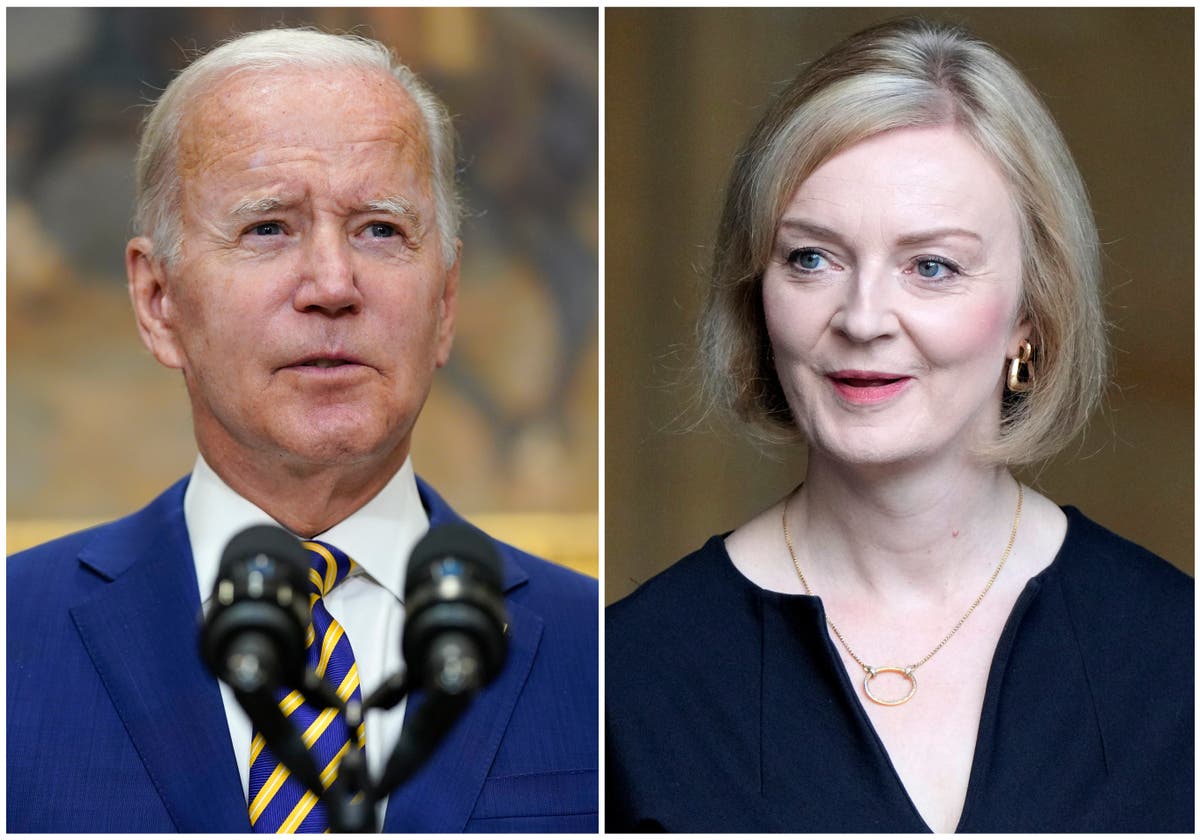 Liz Truss has conceded that negotiations for a post-Brexit free trade deal with the US will not restart for years as she flew to New York ahead of a meeting with Joe Biden.

In her first foreign trip as prime minster the Tory leader will be attending the annual United Nations General Assembly (Unga).

Ms Truss stressed her trade priority is striking agreements with India and the Gulf states.

But she heavily downplayed the chances of talks even resuming to get the comprehensive deal with the States that was billed by Brexit backers as a major benefit of leaving the EU during the referendum.

“There aren’t currently any negotiations taking place with the US and I don’t have an expectation that those are going to start in the short to medium term,” she told reporters.

Ms Truss will also hold talks with Emmanuel Macron, the first since she questioned whether he was a “friend or foe” to the UK.

Labour’s Shadow foreign secretary David Lammy, who was also attending Unga, said: “After being snubbed by the Biden administration within her first weeks in office, Liz Truss urgently needs to wake up to the damage her reckless approach to foreign policy is doing to the UK’s national interest.

“The prime minister must use the UN General Assembly to bring the UK back in from the cold and begin rebuilding our country’s diplomatic influence.”

The Liberal Democrats blamed Ms Truss’s “cack-handed diplomacy” for the failure to secure a trade deal.

“Any competent political party would have made sure the trade and then foreign secretary responsible for this series of failures would be held responsible. Instead, the Conservatives have made her prime minister,” foreign affairs spokesperson Layla Moran said.

Liz Truss does not need to apologise to Emmanuel Macron, culture secretary says

Culture Secretary Michelle Donelan said that Liz Truss does not need to apologise to French president Emmanuel Macron when she meets him at a United Nations summit in New York.

Ms Truss sparked a diplomatic row during the Tory leadership contest when she declined to give a clear answer when asked if the president of the allied nation was a “friend or foe”.

“The prime minister is entitled to make comments on any topic she should see fit to do so, so I don’t think she needs to apologise,” Michelle Donelan told Times Radio.

Ms Donelan added that it was important not to “over-egg” the PM’s previous comments regarding Emmanuel Macron.

The culture secretary described France to LBC as an “important ally and an important relationship we have with France”. Pressed on how the UK might break the deadlock over the Northern Ireland Protocol, she said: “This is something that we are obviously committed to.

“Northern Ireland is an integral part of the UK and it was this prime minister that has been very outspoken on this and determined to ensure that we act and we will see more work on this in the coming weeks.”

“We are back to business in a public forum and work has been going on behind the scenes, I can assure you of that.”

Shadow treasury minister James Murray criticised the government for not using a windfall tax on energy firms’ excess profits to fund help for households during the cost of living crisis.

Outlining Labour’s plan, Mr Murray said: “What we set out is a plan for the next sIX months which is fully costed, which explains exactly who’s paying, Which requires no borrowing and which shows that the windfall tax will make a contribution to paying for that help.

“We said that will get us through the next six months then we will look at what’s needed beyond that. The real dividing line here is who’s going to pay that.

He added: “When we look at the oil and gas giants excess profits we see from the treasury’s own documents we know some £170bn worth of excess profits for the next couple of years and for the government to rule out looking at asking them for a contribution from those excess profits, we think is just wrong. Every penny not raised from a windfall tax falls on the taxpayer.”

Making Ukraine a member of Nato is the “only ultimate security guarantee” for the country, a former commander of the alliance said as he called for Liz Truss to match her words of support with action.

He told BBC Radio 4’s Today programme: “Now is the time for Nato to take risk, to ramp up the support that Ukraine needs.”

Ms Truss is committing to spend at least £2.3 billion next year on military aid to help Ukraine fend off Vladimir Putin’s invasion.

Sir Richard said: “I note that the prime minister, as foreign secretary, said that 2 per cent of GDP on defence was the floor not the ceiling in her Mansion House speech. She has called for 3 per cent of GDP and I’d like to see her match that with action.”

Purpose of Biden-Truss talks ‘not to secure a trade deal,’ culture secretary says

Liz Truss will not be using her upcoming meeting with Joe Biden to try to secure a trade deal, the Culture Secretary has indicated.

It comes after the prime minister conceded that negotiations for a post-Brexit free trade deal with the US will not restart for years, as she travelled to New York for a visit that will include a meeting with Mr Biden.

Michelle Donelan told Sky News: “The prime minister and the president will be meeting this week, they’ll be talking about a variety of different issues, including potential trade deals. So let’s see what comes out of that meeting.”

Pressed on the topic of the meeting, she said: “The purpose of this meeting is not to secure a trade deal. This is the first bilateral meeting between the newly elected prime minister and the president of the United States.”

Liz Truss has described feeling “hugely honoured” that one of the Queen’s “last acts” was formally asking her to become prime minister.

She praised the “huge outpouring of love and affection” for the late monarch and recognised the “huge amount of warmth towards” her successor King Charles.

Ms Truss was speaking as she flew to New York for a United Nations summit after attending the Queen’s funeral on Monday.

The Queen’s death came two days after she formally appointed Ms Truss as Boris Johnson’s successor during a meeting in Balmoral Castle.

In an interview with reporters, Ms Truss said: “It has been a momentous period and a period of great grief and sadness in the United Kingdom, and I think you have seen a huge outpouring of love and affection for her late majesty as well as a huge amount of warmth towards King Charles III.

“Today at the funeral we saw such huge public support and I have also seen that from world leaders who have come to London in unprecedented numbers.

“From my own point of view, I am hugely honoured to have been invited to form a government by Her Majesty the Queen in one of her last acts.

“Since then, I have had two audiences with His Majesty and what I have seen is a huge outpouring of public warmth and support for him and for the whole royal family.”