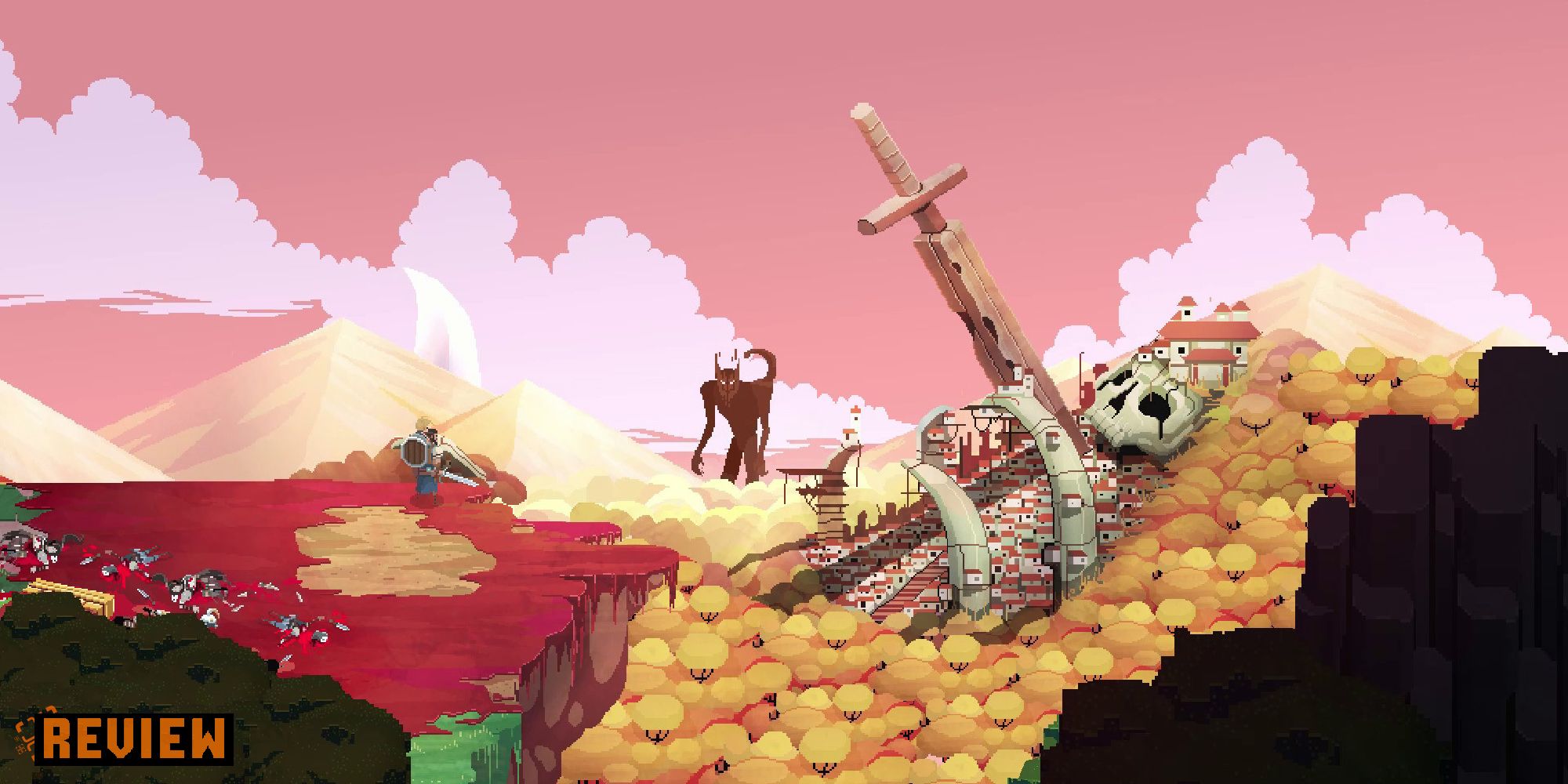 No Place for Bravery is a game about fatherhood, first and foremost. It places you in the shoes of Thorn, a man who sees his daughter kidnapped by a powerful warlock right before his eyes. Shortly after, he comes across an abandoned young boy whom he promptly adopts. What ensues is a tale of hardship as Thorn mounts multiple expeditions across many years to find his daughter, Leaf.

I won’t give much away, but the game’s story takes place in a dying world, one seemingly destined to be obliterated by a giant colossus. Thorn mounts a final expedition with his adopted son, Phid, tied to his back since he cannot walk. What ensues is a very compelling adventure, with Thorn’s damaged mental state and moral ambiguity making him a questionable hero at best – he’s rash, violent, and single-minded, but fits right in with the harsh environment he has to put up with. We understand his anguish, and want him to achieve his goals.

RELATED: Return To Monkey Island Review – A Chimp Off The Old Block

While the bare bones of the plot are easily understood – specifically the main objective of finding Leaf – learning much about the world of No Place for Bravery is a bit of a chore. The vast majority of lore is hidden in a datalog-type menu that gets filled up as you play. Dialogue with NPCs is often difficult to follow, and it’s hard to tell what points are significant and which are just window dressing. Some will relish the puzzles presented, but I found it arduous. I still don’t really know what the main differences are between the New and Old Orders.

As he travels to various new destinations, Thorn encounters plenty of resistance. Combat is a simple affair – you can attack, block, or use a dodge roll, we’re all used to that by now. Branding itself as a Sekiro-like, the game does also include a stance meter for both you and your foes. Parrying enemy attacks will drain their stance, eventually letting you get in a few free hits once their bar is depleted. On the flip side, you need to keep an eye on your own stance, too.

Later stages get very hectic, with tons of enemies to consider, so it’s a good job that combat feels great. Thorn picks up three weapons over the course of the game: a sword, a hammer, and a crossbow. They all feel significantly different to use, and a little off-path exploration will earn you some neat skills, which in turn provide a sense of progression in a game that doesn’t let you boost your health or accrue experience in a similar way to many of its closest inspirators.

Executions are a big part of combat. Sometimes, enemies won’t just fall apart and disappear once killed – instead, they’ll slump over, giving Thorn an opportunity to dispatch them in an excessive display of pixelated gore. It’s impressive how much rage can be expressed through such basic graphics, and it doesn’t hurt that executed enemies drop more loot. I like the executions.

When it comes to difficulty, it would be fair to say that it leans heavily on the ‘oh gosh, it hurts, please stop’ side of things. I’ll be the first to admit that I’m not that great at parry-based combat and the wonky dodge roll made the opening hours more than a bit frustrating. It’s fantastic, then, that there are very flexible difficulty options – you can adjust everything from enemy damage to Thorn’s parry window. Being able to customise the game’s combat on the fly meant I could find a challenge level that I found more enjoyable, and you could theoretically make things even harder if you so desired.

One niche delight I must mention is the personal joy I felt in seeing how Welsh this game is. Spoilers, I’m Welsh, and Welshies love seeing Welshness in the mainstream. For a game developed by Brazilian devs, there’s a significant amount of Welshness sprinkled into the world. This is most noticeable in items, such as the meddygaeth and lle iachâd items – medicine and healing area, respectively – but Welsh language construction is sprinkled throughout. It feels a bit ‘slotted in’ and unnatural sometimes – as if Welshness just feels ‘alien’ enough to suit the eerie otherworld that No Place for Bravery creates – but speaking as a Welshman, we’ll bloody well take it.

No Place for Bravery surprised me in many ways. When I first started, I was ready for a gory festival of combat with a good story to go along with it. What I got was a beautiful, dark narrative that pushed me to reach the end credits far more than the promise of combat would have. The things I loved most are things I can’t talk about in this review for fear of spoiling the experience – No Place for Bravery feels fantastic to play, and Glitch Factory has created a story that will stick with me for years.

Score: 3.5/5. A review code was provided by the publisher.

NEXT: Nintendo Switch Is More Than Mature Enough For Yakuza