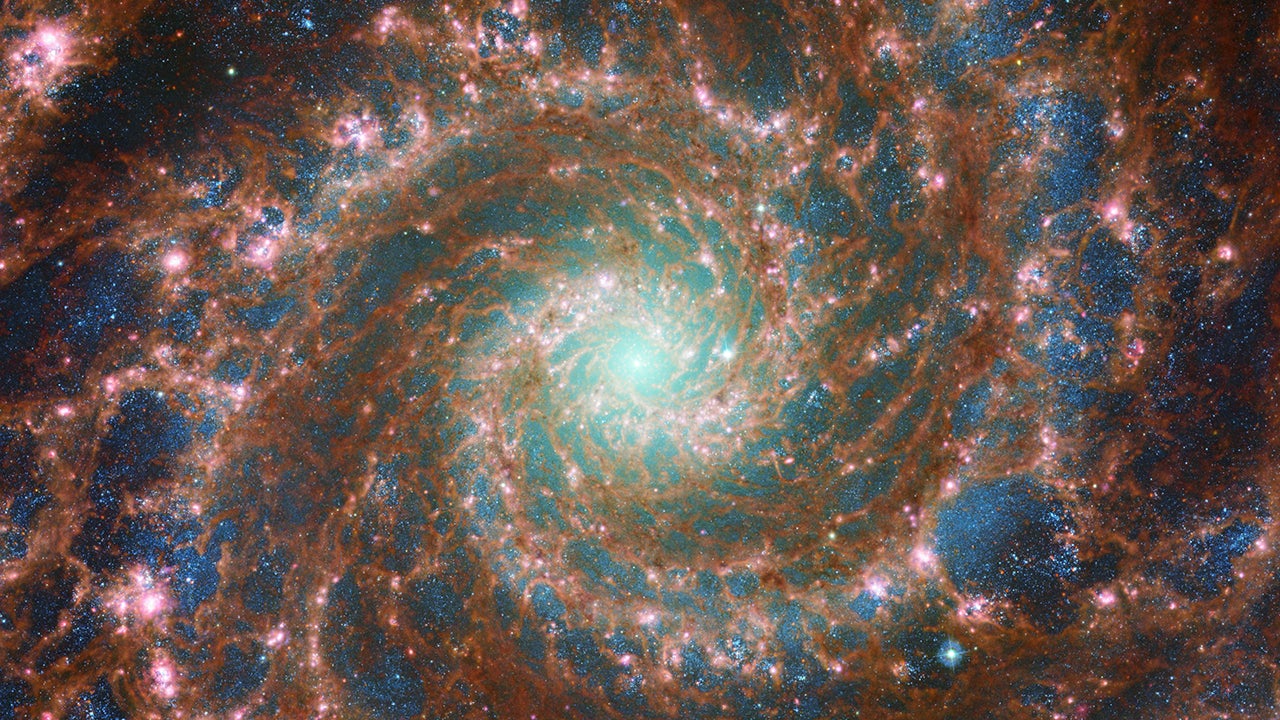 The James Webb Space Telescope (JWST) has captured a stunning view into the heart of the vast Phantom Galaxy – officially known as M74 – which lies 32 million light-years distant from Earth in the constellation Pisces.

This latest cosmic piece of art from the JWST is a perfect example of how data captured by multiple orbital telescopes that are designed to observe different wavelengths of light can be combined to create a more complete, and spectacular view of an astronomical object.

The new JWST imagery was captured using the telescope’s Mid-InfraRed Instrument (MIRI), which is designed to observe light that exists in the infrared part of the electromagnetic spectrum.

Ordinarily, our human eyes would be incapable of perceiving this kind of light. However, astronomers are able to take the raw infrared data collected by telescopes and instruments such as MIRI and assign them colors that we can comprehend.

This is useful, as galaxies such as M74 are saturated with enormous clouds of interstellar dust and gas that prevent telescopes that observe the heavens in the visible part of the electromagnetic spectrum from seeing its underlying structure.

Thankfully, infrared telescopes such as the JWST are able to look past this obscuring layer to observe that which lies beneath, in order to provide a more complete view of the universe.

In the case of the Phantom Galaxy, Webb’s powerful infrared eyes revealed an ethereal view of the filaments of dust and gas that lie within M74’s well defined spiral arms, and a clear central region that plays host to a dense cluster of stellar bodies.

Previous observations made by the Hubble Space Telescope meanwhile showcased the galaxy in the ultraviolet and visible parts of the light spectrum. The Hubble data highlighted a central population of old red stars, and the locations of younger blueish stellar bodies that pepper the spiral arms.

Red gasseus regions dotted throughout the structure represented regions of intense star formation, where the light pouring out from powerful young stars had energised the surrounding clouds, causing them to glow.

Scientists were able to combine the Webb and Hubble data to create a truly spectacular view of the Phantom galaxy. Here, JWST data has been colored red to denote the mass of dust weaved throughout the galactic structure, with regions of orange representing hotter regions of matter. Young stellar bodies meanwhile are represented in blue, while their older cousins are shown in a cyan/green hues.

With the new Webb data, astronomers will attempt to shed light on the processes that governed star formation in the early universe, and to figure out the ages and masses of ancient star clusters.

Check out IGN’s science page to stay up to date with the weird wonderful, and often magnificent world of science.

Anthony Wood is a freelance science writer for IGN.